In the early 1960's, Wallace and Ruth Shuler Smith returned to Graham County to help care for Ruth's aging parents. Soon after, Wallace began working for Dave Townson, owner of Townson Funeral Homes. His duties included those in the funeral profession as well as operating the ambulance service for the area. In those days, the funeral home's hearse doubled as the ambulance.

After Mr.Townson's death, Townson Funeral Homes were purchased by the Rose family of Murphy. At that time, Wallace took the opportunity to become part owner of the funeral home in Robbinsville.

In 1978, the Rose family sold their remaining interest of the Townson Funeral Home in Robbinsville to Wallace and his son, Johnnie Smith. Out of respect for Mr. Townson and his years of service to Robbinsville and the surrounding communities, the Smith family chose to keep the Townson name for the business, and began operating as Townson-Smith Funeral Home.

In 1994, after graduating from Gupton Jones College of Funeral Service, April Smith, Johnnie's daughter, joined the family business as a Funeral Service Licensee.

In 1998, Tim Eller, a Robbinsville native, came to work for the Smith family. In 2005, after Wallace's death, Johnnie sold a portion of the business to Tim.

Throughout the years Townson-Smith Funeral Home has set a high standard of care and compassion for grieving families. Wallace believed that when he received a call requesting his services, he was working for that family. He taught us all that we were to always do our utmost to make sure a service is carried out the way the family requests. It is our desire to continue the quality of service Wallace began, while helping the families we serve in their times of greatest need.

A Tribute to Wallace Smith 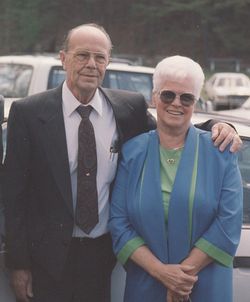 What is a Funeral Director?

He is a man of high ideals, and does his very best;He listens to sobs and sorrows, more times than you can guess.He deals with so many emotions, the strain somtimes unreal;The torment and the sorrow is something that he feels.He choose a life with sorrow, and sometimes a lot of pain;Dealing with the people's emotions is continuous stress and strain.His life is so different, the hours are unreal;There is no other profession, so demanding and unreal.Time off, it is nothing and there is no family life;He is married to a business, morning, noon, and night.His wife, she is a special one, to put up with all of this;When she thinks of all the things in life she's missed.He's placed upon a pedestal in everybody's sight;Should he ever falter, they make a shamble of his life.Yes he is a human just like you and me,He is a Funeral Director, of which he is proud to be.

In Memory of Wallace C. and Ruth Shuler Smith and their dedication to serving our community.

A year of daily grief support

Our support in your time of need does not end after the funeral services.  Enter your email below to receive a grief support message from us each day for a year.  You can unsubscribe at any time.